Iran’s new drone swarm Shahed-136 tech a gamechanger and via Yemen, Hezbollah and Venezuela a threat to Saudi Arabia, Israel and even the United States? 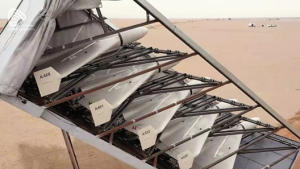 and see this VIDEO

These types of drones fly directly into a target and self-destruct, and Iran seems to have acquired it.

Images of a new Iranian drone launcher have appeared online and in Iranian media over the past several days. The drones, dubbed Shahed-136, were combined with missiles in a drill that Iran says took place last week.

Iran has called these types of drones a “suicide drone,” or kamikaze drone. This means they fly into a target and self-destruct.

These types of drones have been mentioned before but have not been shown in such close-up detail.

(JNS) Iranian-made unmanned aerial vehicles (UAVs) are stationed in Venezuela, on the northeast tip of South America, where some 2,000 kilometers (1,243 miles) separate them “from skyscrapers in Miami,” the author of a new report on the threat of UAVs has told JNS.

Maj. (res.) Tal Beeri, head of the research department at the Alma Center, a defense watchdog located in northern Israel, said the new report highlighted a topic that until now has received little attention — the arrival of Iranian-made UAVs in the western hemisphere.